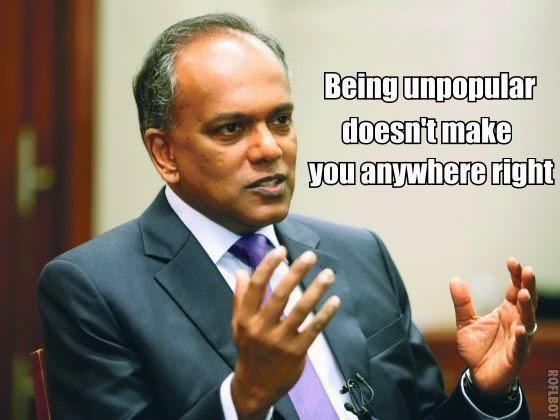 As a Singaporean, it is heartening to hear that you are committed in continuing "right" policies and bulldozing the unpopular. Presently, you are doing very well. Without your "right" policies, Singaporeans wouldn't have managed to take the top spot in being the most unhappy people in the world and the Workers' Party would not be where they are today.

I applaud you for telling the right thing - the latter half to be exact - there is no reasonable doubt that PAP government has been doing what's not popular. Your years as a senior counsel sure serves you well with that arty farty phraseology of making being unpopular fabulous for governments. Indeed, not many governments get the privilege to screw up and remain in power. Or more accurately, not many governments get to charge their critics with defamation suits and jail them without trial.

Avoiding the pitfalls of being populist is indeed important, and saying that made you my Law Minister look great! Foreigners must be really envious of us for having a government with the right brains formulating all the right policies making all the right decisions. 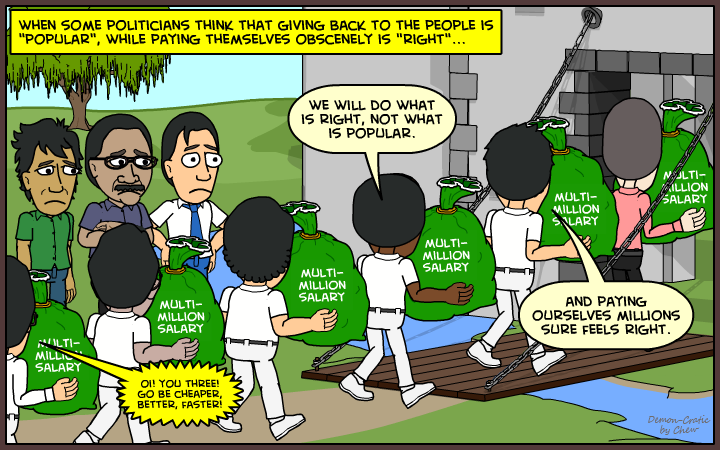 Let's delve a bit into the "right" policies and agree that what is right means beneficial for Singapore in both the immediate and long term aspects of the economy and society. For a start, any policy that hurts Singaporeans is logically not beneficial to Singapore. It certainly doesn't make sense to see a rich country with trillions of cash tucked away in the CPF and National Reserves for its sovereign wealth fund companies to make bailouts in the private equity market, while the people are struggling to afford retirement and healthcare. It certainly isn't the right policy to call for a population boost when the people are facing overcrowding and inflation resulted from the influx of foreigners. It is also certainly not right to call for a fare hike when the public transport companies are charting tens of millions of profits and causing inconveniences in terms of break downs happening every other week.

We could look at some of the right policies your government has passed many years ago. Back then, the first right policy was the CPF system conceived to provide Singaporeans with retirement. Many decades later today, Singaporeans could not retire and many of them in their 70s are still slogging as hard as when they were during their youth. If hindsight is 20/20, the CPF system failed to fulfil its primary purpose and hence is a wrong policy. Then we have the two child policy in the 80s, and it resulted in an ageing population today. We also had the COE and ERP policies, which relentlessly drives up the cost of businesses while the traffic became more congested than before. We can give these "right" policies an infinite timeline to settle in, but they have never been proven right in any sense then and now.

How many of these policies were "right"? Would you say your present policies of immigration, housing, national service and transport is just as "right"? It is worrying for someone in a Ministerial position, drawing more than a million dollars in taxes every year, to make unsubstantiated boastings about making the "right" policies otherwise known as bullshit. It is especially offending for Singaporeans, who are now bearing the brunts of your "right" policies while you wax lyrical about righteousness. Hold your tongue if you have nothing better to say, making yourself unpopular doesn't make you anywhere right.

Yours Sincerely
Alex Tan
Posted by Cheated Singaporean at 14:51