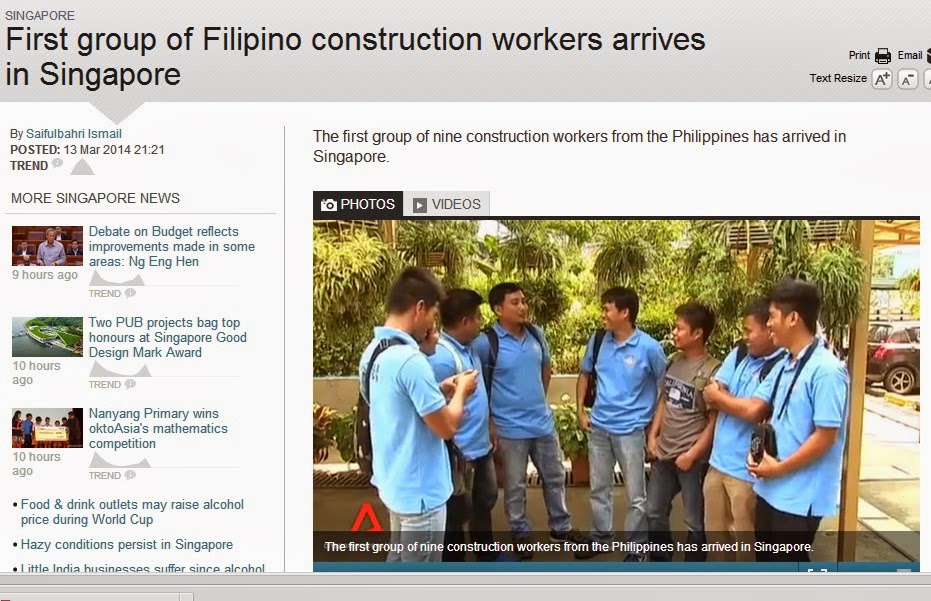 They are better educated and they speak better English than Bangladeshis, China and Indian workers. Like others, they are hardworking, hungry and cheap. Singapore's latest source for cheap labor is coming from Philippines. The PAP government has recently set up overseas training centers in Philippines and are looking to recruit some 200 Filipino construction workers a month, or 1200 workers a year. Strangely, the PAP government do not see the need to make similar effort locally and create similar training centers in Singapore then choose to complain blindly that no Singaporeans want to be a construction worker. The decision to recruit Filipino construction workers was never in Singapore's mind before, the prime choice of cheap labor has always been China, Bangladesh and India. This however comes conveniently right after the China drivers' strikes and Little India riot. The PAP may believe Filipino workers are more docile and more willing to accept abuse and exploitation than the average China, India and Bangladeshi workers. If this is really the supposition the PAP hold, they are going to be very wrong. Overseas Filipino workers are widely known to demand a lot more than others. It will only be a matter of time more of them will start demanding for Permanent Residency in Singapore and make Tagalog an official language of Singapore.

But what Filipinos do not realize is that Singapore has an exploitative employment culture. The typical construction worker from Bangladesh and China has to pay more than $4000 in agent fees to secure a work permit in Singapore. They usually work overtime everyday, up to more than 72 hours a week so they could pay off their exorbitant agent fees and send what's left to their family. The meals of these construction workers are also overtly modest - nothing more than a packet of rice with curry gravy. Their entertainment are also kept very cheap ranging from watching bikini-clad girls in Sentosa to hanging out with friends in Little India. It makes one wonder if the Filipinos are as hardy as the average construction workers in Singapore. They may or may not get to earn more in Singapore, but their life is definitely going to be very much tougher than they already are in Philippines.

Filipino construction workers in Singapore are going to sense the seriousness of income inequality and the lack of disrespect as felt by Indian workers. They will look at Filipinos holding on to S-pass and E-pass, and wonder why are they treated so much differently. Even the Filipino maids are having a better life and earning more than them. The long term envy, or jealousy for some, will create an imbalance in mindsets and lead to an increase in crime rate and eventually a riot.

At the same time, the enclaves of the Filipino community will go beyond Lucky Plaza and Orchard Road. Tourists around the world will start asking where are all the Singaporeans in Singapore. Singaporeans has already become estranged from the influx of foreigners and the further intake of these Filipino workers would make good reasons why more Singaporeans are getting bitter. After all, the ultimate beneficiaries of these workers are construction companies, employers and the PAP government who stand to gain $750 a month per worker hired. Singaporeans will not only not gain a single cent from their presence, their public transport will be more crowded than ever.
Posted by Cheated Singaporean at 10:27