PAP Minister: Singapore is a city, not a country

"...the Gini coefficient here has fallen and while it was high for a country, it’s not high for a city, which we are...If you look at cities … the Gini in New York is higher than the Gini for America"
~PAP Minister Lawrence Wong 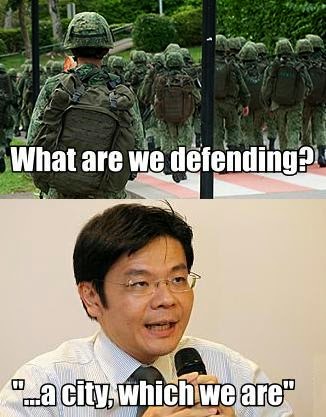 Above is the response to a student why Singapore have such high income inequality. Singapore is now officially a city and not a country, henceforth all measurements and expectations of a country does not apply to Singapore, according to the PAP Minister.

Singapore is built by Singaporeans with its male citizens sacrificing more than 2 years of their youth and risking their lives for this country. Every year, there are NS men who die or get permanently incapacitated due to National Service training. I wonder how these NS men six foot under would feel had they found out Singapore is actually not a country after all.

Aside from having a defence force of its own, the country also goes through an election. Never mind that the election in Singapore is not democratically recognized, it is still a process the people go through to acknowledge their country's sovereignty. Singapore may have all the traits of a city, but it's status as a independent state should not be trifled with or conveniently used for an ignorant Minister's weak defence against income inequality. Is this a slip of tongue, or did the loose immigration policies actually diluted Singapore's national identity right from the Ministerial level?

Besides, even if Singapore is a city, the fact remains that the PAP government have not offered sufficient support to ensure the poor enjoy their fair share of the nation's success. In other countries, they have suburbs for those who enjoy the slower pace of life and do not mind earning lesser. Singaporeans have nowhere to go to except to emigrate if they ever want to have a better quality of life. It is apparent that the PAP Minister is unapologetic to the poor and has scripted his defence to counter questions pertaining to income inequality in Singapore. Singaporeans are very unfortunate to have such a person for a Minister.
Posted by Cheated Singaporean at 13:09