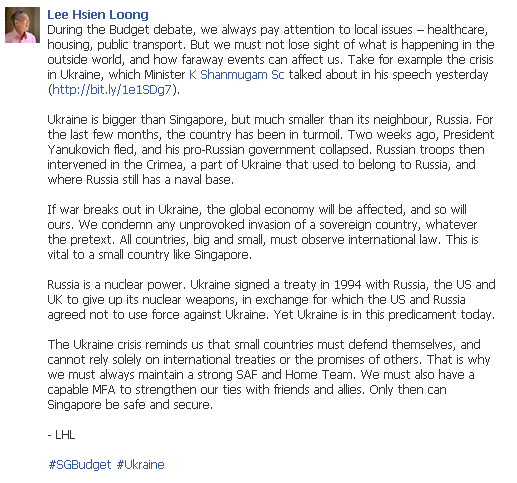 As expected, the commentaries by Straits Times and Lee Hsien Loong (see above picture) has spun the Ukraine crisis into one that supports the ridiculous Defence Budget and the necessity of National Service. But are these really true lessons about the necessity of defence for a small nation Singaporeans should consider?

Here is one true lesson about Ukraine: Real Democracy

A better interpretation of the Ukraine crisis, is the emphasis of a true representation of the people. Lee Hsien Loong don't want you to know that a people's revolution has just happened in Ukraine. Through several bloody protests, the Ukraine people and their Opposition Parties actually has overthrown their dictator President because they believe Ukraine Elections are not fair. The people do not believe their controlled media and refused to be threatened by their former government who have gone as far as shooting protestors on sight. Most notably, the protesters fought the police with mirrors:


There were so many Ukrainian protesters who died, and this brings another real lesson to Singaporeans: Freedom is not free, it costs lives. Dying for your people's freedom is true patriotism. No of course the PAP don't want you to know that. They want you to believe that Ukraine is in a very bad situation today because they gave up their nuclear weapons and entrusted their security to US and Russia. And PAP wants you to believe that Ukraine is in trouble because they did not focus on their defence, which is bullshit because the Ukraine's defence force is no push over for your info(they have more than 15 million people fit for service).

Here we also learnt the importance of a free and independent media. One that does not side with the ruling party and practice censorship like in Russia and Singapore. And the most important of all: Freedom of Speech. The Internet is a great source of unrestricted information that enunciates the truth. Most of these protesters actually turned anonymous online to set up pages and hack into the former Ukrainian government websites. This is also why Singaporeans must oppose to the PAP's attempt to control the internet in the name of "cyber-bullying" and setting up of the $50,000 bond for "responsible" reporting by news media.

Singaporeans should take the real lessons of Ukraine and stop listening to the PAP-controlled mainstream media. The Ukrainian people certainly did not listen to their former government to stay at home in order for the revolution to happen. If not for the revolution, would the Ukrainians finally find out how "rich" their country really is? Singaporeans should be looking at our own state of Democracy instead of how rich and powerful our SAF really is. We might finally get to know how much do we really have in our National Reserves after all.
Posted by Cheated Singaporean at 02:37