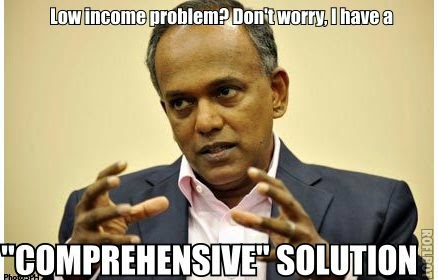 "We have a comprehensive solution to uplift lower-paid workers", claimed Law Minister K Shanmugam in a fundraising event to help needy workers. The latest boasting however contradicts with wage indicators, which reflects the long term wage suppression in Singapore. According to the Manpower Ministry's report in 2011, salaries of the bottom 20% income earners have been stagnated for over a decade. Former GIC chief economist Yeoh Lam Keong has also substantiated the report by presenting statistics which shows that the salaries of the bottom 20 percent income earners have fallen by 10% in real terms over the period from 1997 to 2010. The latest labour report on income also tells the similar sob story of how depressed salaries of the bottom 20 percentile are, with only a 0.3% real income growth over the period from 2003 to 2013. The official statistics and analysis is testimonial that Shanmugam's "comprehensive solution" is not anywhere uplifting the low income earners.

Let's take a look at his comprehensive solution and dissect the existing policies. Structure-wise, the role of trade unions is to counter balance the economical needs of businesses (cheap labour as always, the cheaper the better) and the government. Being the only union in Singapore, NTUC is supposed to be monitoring wage levels across all industries and negotiate for better benefits with the regulator (Ministry of Manpower in this case) and employers. This is however not happening because the NTUC is controlled by the government, with its union chief being a Minister of State. This is clearly a conflict of interest, henceforth there is no watchdog in place to monitor wage levels and represent the workers to fight for better benefits. Our union is non-existent. NTUC is only an insurance company or supermarket to Singaporeans. Secondly, we have also laws enacted in place that are unfair to workers. The government outlawed spontaneous protests and strikes, naturally, taking away the right not to work unless one is duly paid, or otherwise known as the only bargaining chip to negotiate for a better pay.

The second part of Shanmugam's comprehensive solution is ad hoc cash vouchers. Workfare is paid as and when the PAP government pleases, and more notably, used as carrots during election period. Then, we have the new Wage Credit Scheme, where the government use taxes to subsidize 40% of wage increase. It has been in effect since 2012, but income level still failed to pick up. There are also a number of policy tweaks which have very little contribution to low wage workers. All these are what Shanmugam called, a "comprehensive solution", that continues to marginalize low income earners and forever keep them in the rat race.

The real solution of course is actually very straightforward and have been in place in other countries for decades. Minimum Wage, independent unions and legislating the right to protest for a start. This are 2 policies the PAP is trying to avoid because the first defeats the cheap labour culture they are promoting, and the rest takes away political power from the ruling party. The PAP need to stay in power and will do whatever it can to maintain status quo. Low income workers may not see a better life ahead of them but at least they have Ministers like Shanmugam to give a comforting speech telling them how fortunate they actually are.


Posted by Cheated Singaporean at 13:19