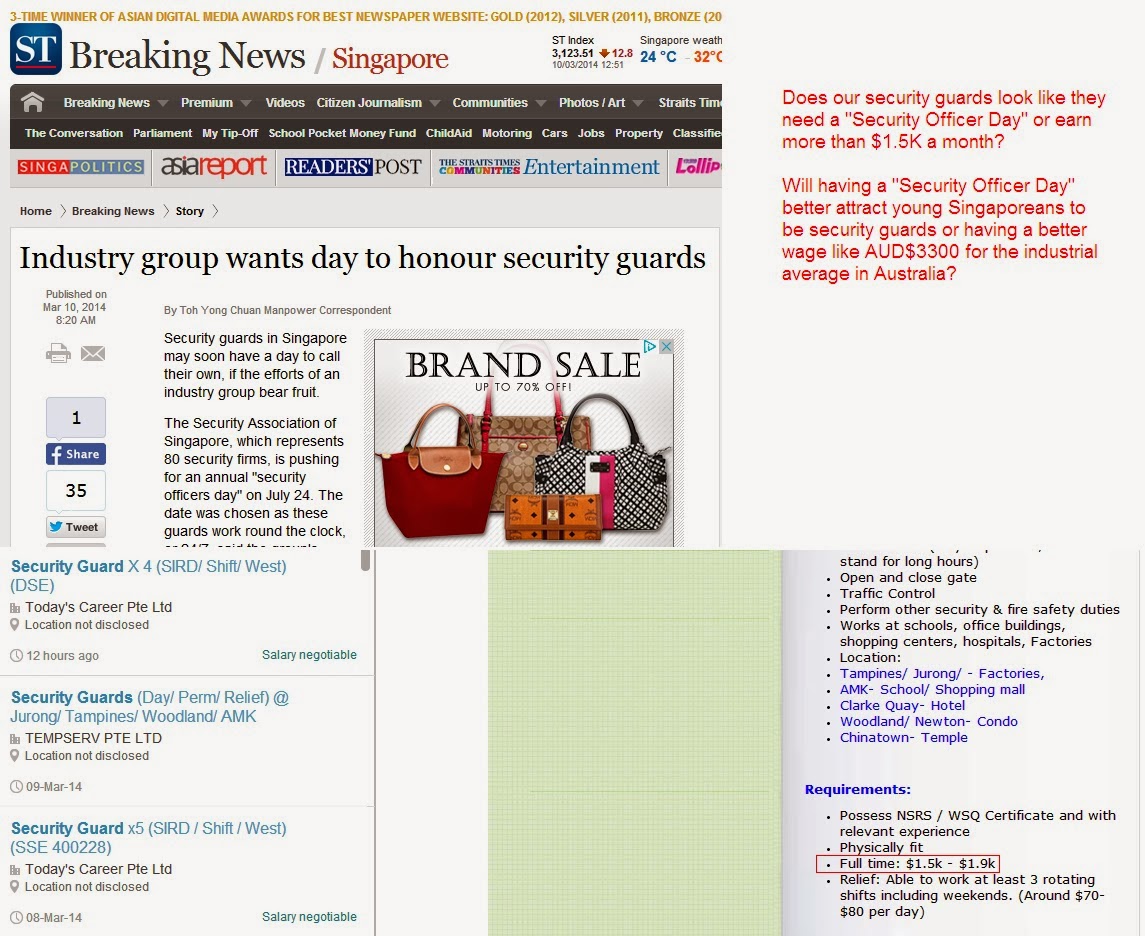 It is hilarious how unique Singapore can really be especially when it comes to exploitation of workers. In their initiative to push for a "Security Officer Day", the Security Association of Singapore claim this will better recognize the efforts of our security officers and attract more people to the security industry. However, is having a day you could call "your own" really what these lowly paid and overworked security guards need?

Just a few months ago, the call to raise security guards' salaries have been put off because their employers are "worried" about the cost increase. This reason alone is enough to continue paying security guards $800 a month and it is really dubious if having a "Security Guard Day" will make any difference. Security guards in Singapore usually work averaging about 72 hours a week, or 12 hours a day for 6 days a week, drawing a salary from $1500 to $2000 including overtime. Some are even paid from as low as $800 a month. The working hours of a security guard is the longest in any industry, which explains why there is a high turnover for the industry.

Interestingly, despite such low salaries and having the longest working hours, security guards in Singapore are high in demand. A functioning economy will tell you that a job that is high in demand is usually well paid and comes with good perks. In Australia, security guards are paid from as high as $3300 a month on average, or about $20.18 per hour. They have no shortage of security guards. However in Singapore, this is otherwise. The main reason behind this is solely because of the lack of a trade union for the security industry. Unlike for the cleaners, NTUC did not propose a minimum salary for security guards. Employers are able to trample on their employees' rights and demand for a decent salary because the government allow it to happens so in the name of sustainability. The trickle down approach by the PAP government usually means little or nothing left for those at the receiving end, hence this is why front line employees are usually lowly paid and largely unmotivated. Having a public holiday for them is not going to relieve any of the bitterness felt by these exploited employees. These security guards in Singapore could not even protest like their counterparts in US does, we all know the PAP government is more than happy to punish dissent.

Companies which can't survive paying decent salaries to employees should have no place in Singapore. Their sustainability must not be built on the misery of employees because this is akin to slavery. Being a slave is a job with terms and conditions too, and you can still be paid. The PAP government's primary priority should be to allow unprofitable businesses to fail than to allow them to violate the human rights of Singapore employees. It is hard not to find fault with the PAP government with their employment model they adopted and so shamelessly defended. Perhaps we should start with firing Minister Tan Chuan Jin by removing him out of Marine Parade GRC.
Posted by Cheated Singaporean at 13:22