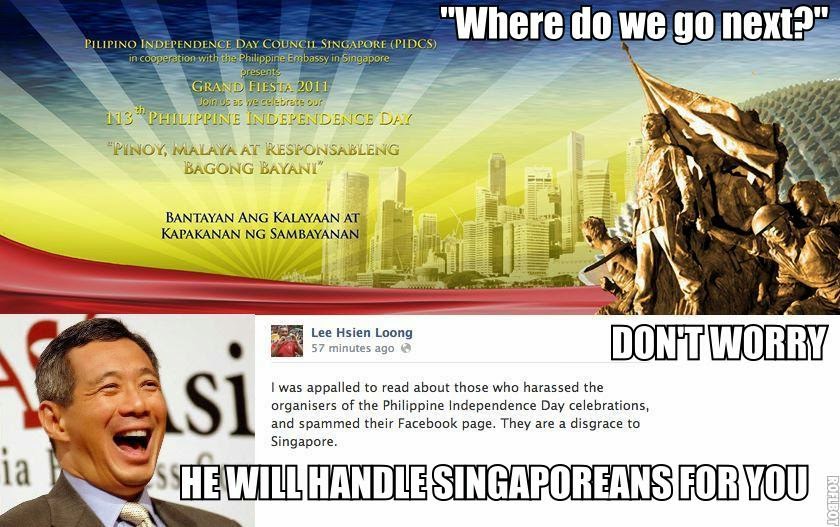 Gone are the days when we could rely on the PAP to protect our interests.

Prime Minister Lee Hsien Loong and rookie Minister Tan Chuan Jin have thrown in their support behind the Filipinos and condemned Singaporeans who have spoken up. The argument from the PAP point of view has of course been simplified to vilify and demonize those Singaporeans who are actively defending their country's sovereignty. The PAP believe the Philippines Independence Day is just like any other cultural festivals. They make special references to "Singapore Day" events held overseas and shame Singaporeans for being xenophobic and even calling us a disgrace. This is a very huge accusation which is heavily discounting his credibility as a leader of Singapore, Singaporeans, with the exception of immature voters, are simply not going to take in such a superficial excuse. The Philippines National Day should be contained to within their embassy compound, the same way the United States and other foreign embassies does.

Flying your flag in another country right in the middle of the city is certainly inappropriate. It doesn't reflect us as a multi-cultural society, instead it confuses Singapore's national identity. Tourists and Singaporeans alike will be asking if Orchard Road has become the second Manila, but it appears Lee Hsien Loong is proud to have Manila in Singapore.

The mainstream media have picked up the article from The Real Singapore and are actively publishing pro-Philippines opinions to sway public perception. Fortunately, this has amounted to little effect. Singaporeans who started the activism are not even a little disgraced as Lee Hsien Loong wanted them to be. It is a good sign for country that there are Singaporeans who are proud of their heritage and are willing to go the extra mile to preserve what's left of their National Identity, especially in today's time of pro-foreigners employment environment. Keep it up Singaporeans, do no succumb, claim your space back.
Posted by Cheated Singaporean at 15:29