Bursting of the Population Bubble in Singapore

Singapore is overpopulated. This is neither an issue up for debate, nor a biased perception held by Singaporeans - it is a fact backed statistically in terms of population density (ranked 2nd in the world), anecdotal evidence in the continuous breakdowns in public infrastructures and the resulting inflation from the increase in domestic demand. Being the only one responsible entity culpable for the bubble, the PAP government brought in an influx of foreigners calling them talents, so they could depress wages, bring up property prices and rapidly increase the government revenues and salaries of the Ministers and MPs. The result is everything any government wished for and the PAP became obsessed with the amount of taxes and CPF they are collecting each day. The PAP created the population bubble and it is now bursting.

The key question behind a population bubble is what happens when it burst. Like the housing bubble and credit bubble, the sole similar financial impact that concerns every one is a heavily damaged economy that will take years to recover. The artificially inflated domestic demand will eventually cause a runaway cost of living, which already tops the list of grievances of Singaporeans. Resulting from the similar demand, the public infrastructures are giving way and causing more inconvenience. Competition for jobs and wages intensified and created an employment environment based on cheap wages and low productivity as employers become more interested in getting foreign worker quota than improving their company operations or getting new machines to be productive.

The social costs from the population bubble is more prevalent. Stories like employers terminating Singaporeans in preference for cheap foreign workers become a norm, and it is no surprise that the yearly-released statistic shows that Singaporeans unemployment rate is always higher than Permanent Residents. 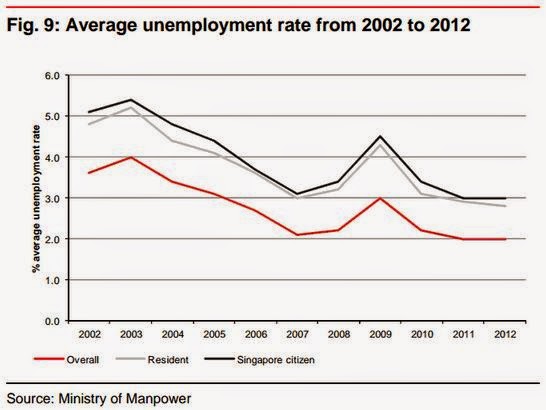 
"In 2009 as well, employed older persons (aged 65 and above) made up about 3.1% of the resident Singapore workforce. This was an unprecedented high compared historically."
~Ministry of Community's paper on Elderly Singaporeans


Without factoring inherent structure unfairness in terms of CPF and National Service, it is clear Singaporeans across all ages have paid heavily in terms of social costs for the formation of the population bubble at the current number of 5.5 million.

The bursting of the population bubble will result in higher crime rate and intense polarization of society between the rich and the poor, Singaporeans and foreigners. Xenophobia and racism will be rampant as they continue to be fanned by PAP's pro-foreigners policies. The bursting will see more rebellious acts like an open street protest and fights between the Police and Singaporeans. Presently, the Police has admitted they are understaffed, and eventually, they will be overpowered. Once the Singapore Police loses its control over the population, there will be no law and order. Anonymous acts of sabotage or even terrorism against the PAP Government or their supporters will intensify. In a country where there is oppression of the people, assassination is only a matter of time, even though at present, the bodily harm did against PAP politicians are done by mental cases. Politically-motivated crimes will shoot up - some will be caught of course, but how many people can you jail? Employees, both foreign and locals, will stand up against exploitation through strikes and riots. The country will continue its chaotic state until the day the PAP loses power.

It is at Singapore's best interests that the PAP lose power by 2016, because retaliation will be stronger as the PAP continues their anti-Singaporean policies in the name of GDP. The problem of the population bubble is political, and hence interim tweaks and fixing of policies and ramping up of infrastructures will never be the solution.

The solution itself must be political, the message must be anti-PAP.
Posted by Cheated Singaporean at 15:03