Cass Owary's is your typical Internet Brigade, or more infamously known as the PAP troll. They are not interested in a sound debate, they are there to defame your character so whatever reasoned arguments you make will be invalid. Ad hominem attacks like this is a very common strategy used by the PAP troll. They make big claims about others' credibility using names like Warren Crass, Bryan Ti or in this case, Cass Owary(name of a bird, google it up). What caught my attention this time is Cass Owary's attempt to be logical, and he could have passed this off easily to the untrained eye.

Below is my reply to "Cass Owary"'s reply on Roy:

Thank you for starting off the your first paragraph calling Roy's speech "full of emotions but short on facts". It actually attracted my attention and made me read more what you have written. However, I will not make any snide remarks like you did and simply leave the judgment to readers. To better size up the fallacies in your reply, I have numbered them as follow: 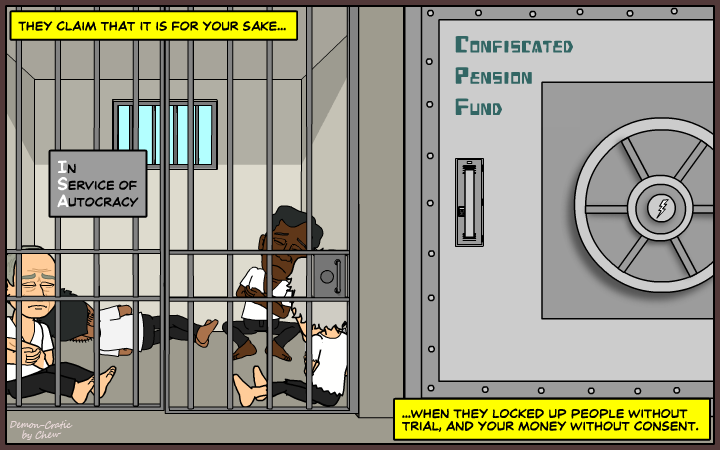 2) Budget surplus is not given away to TH, GIC or MAS to invest. They are tucked away in the Reserves. The Government does not invest, it issues bonds called SGS.

3) CPF funds are lent to TH and GIC through the CPF Board. How could PM Lee, as the Government, not know the amount of funds CPF Board loaned out, and at the same time, as the Chairman of GIC, not know the amount of funds GIC borrowed from CPF Board? If he doesn't even know the basic of how much is loaned or borrowed on the two organizations on the same transaction, how much further clueless is he? Money is fungible indeed, but there must be accountability and transparency from the CPF Board, because the CPF is the people's hard-earned money and not yours for the PAP to keep.

4) Roy Ngerng is making something out of nothing, probably out of ignorance." - snide remark yet again

5) Transparency or Accountability? Let me quote you quoting Roy:

“So I ask again, did the GIC and Temasek Holdings use our CPF money?How long have they been using our money to earn for themselves?How much money have they earned with our CPF?We want full reports. Not just from today. But for all the years since 1974, when Temasek Holdings was first started.What have they done with our money?”

The question Roy asked is about accountability. What have they done with our money, and more explicitly, the excess profits made from the CPF seed capital? Telling me TH scoring 10/10 on Transparency sheds no light about Accountability and where that excess profits have gone to. You don't get all sorts of information from TH and GIC as Cass Owary claimed.

8) For a fair comparison, we should compare CPF returns to a 30 year bond like the Korea's 30 year bond which yields a 4.14%. Cass Owary compared it to a 1 year bond, but we all know we can't even touch our CPF in 30 year's time for most of us, let alone 1 year.

9) High income per capita coupled with high inequality simply means the rich are getting richer and the poor are getting worse. 26% of Singapore's population are below the unofficial poverty line (PAP denies the need for a poverty line but we set it to UN's standard of less than half of the median salary's at $3500). If Singaporeans are so rich, why do we rank so poorly on the domestic purchasing power index?

10) Singapore's unemployment rate for Singaporeans is 3.1%. This figure has been massaged by the PAP government because about 40,000 of the NSFs are included in as "employed". So are retirees, while unemployed retirees are not part of the unemployment stats because they are, well, retirees. So are unemployed mothers, well, they are "housewives". The real unemployment rate is actually a lot higher when you factor these people in. I'm not saying MOM is lying, but I seriously doubt their methodology.

11) Home ownership is third highest in the world, so are debts. Singapore's debt to income ratio is at a dangerous 2.1 times, and at least 20% of us are in 40-60% debt. This is a prelude to a credit crisis, again, overleveraged.

12) When an old man squandered away his CPF savings in a year, does it mean everyone is doing it too? We get idiots all the time, but fortunately they are a minority. This is just another flimsy lame story cooked up to lock up your CPF. I could turn the argument: if all the money are kept by CPF, wouldn't Temasek Holdings and GIC squandered them away in a short time like this $58 Billion loss?