The recent increase in the attacks on the CPF policies have shaken up many Singaporeans from their slumber but what really cements the increasingly negative perceptions on the CPF policies is the PAP government's inability to fend themselves. Historically, the typical PAP's 3Cs response to any criticism - Conversation, Counter-information and Charading, used to work on Singaporeans, but not in this case when real stories of retirees struggling for a living are seen everyday happening on the streets. As such, Singaporeans are more likely to believe the inadequacies of the CPF than the rookie Minister who makes blanket statements.

However, the CPF may not be a failed scheme by itself have it being supplemented and coordinated with other policies especially in the area of manpower, housing and immigration. The current CPF system is unsuitable for the environment it is in, even though we all agree that the fund should be self-sustaining and not cause a deficit in every year's Budget.

Here are some of the design flaws of the CPF:

1) Minimum Sum without Minimum Wage
The CPF Minimum Sum was set upon and increased by an incorrect barometer - inflation rate. This has caused much grievances especially when salaries have not kept paced with inflation. How should we determine the Minimum Sum when we do not have a Minimum Wage? The PAP worry that businesses may be unsustainable because of a Minimum Wage, but they do not worry if Singaporeans' lives would be sustainable with such a high Minimum Sum. Singapore should set a Minimum Sum which is based on a Minimum Wage that it should have implemented since ages ago. The right idea of a Minimum Sum of $155,000, is that the PAP government tops up whatever MS shortfall for those who do not meet the MS, say, by the age of 50 (or a few years before retirement), and not expecting people to face the inhumane choice of meeting the MS or continue working.

2) CPF interest rates pegged to market interest rate
The CPF Ordinary Account interest rate is pegged to the 12 month fixed deposit and savings rate of the local banks. This is a recipe for disaster because if not for the legislated minimum amount of 2.5%, our CPF OA rate will be 0.21% per annum. Interest rate is vital because it not only helps to grow the CPF fund so we could depend less on wage growth, it preserves the fund value so it will not leak out to yearly inflation. The purpose of the CPF is to provide a retirement for account holders, and not to become a market-based saving account which pegs itself to the market interest rate and 12 month fixed deposit interest. Based on this mission, the CPF interest rate should rightfully peg to, arbitrarily and modestly speaking, 1% higher than that of the yearly announced inflation rate.

3) Retirement/Withdrawal Age pegged to average longevity
It is a fallacy to believe when people are living longer, their employment age and economic-viable period magically lengthens. Raising the Retirement/Withdrawal Age must be justified with relevant facts that can prove Singaporeans elderly are getting healthier, lesser Singaporean elderly need more healthcare, the job markets are paying better and hiring old people etc. The longevity or median deceased age is not relevant and doesn't justify why should the average Singaporean be working longer. 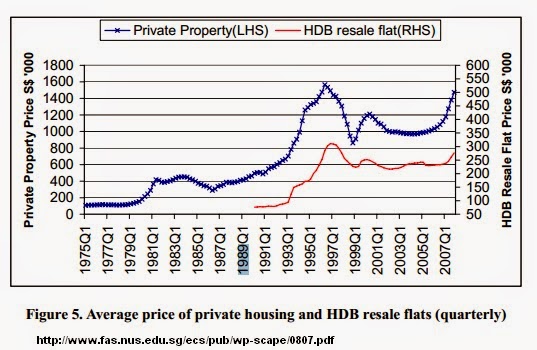 4) Allowing CPF OA to purchase Housing
When this rule was first introduced in 1989, HDB prices shot up and never came down since. The other unreported news was that the retirement fund of Singaporeans went down and never came up too. It is a zero sum game - the amount of wealth did not change. The resulting inflation of the HDB prices was marketed as "Capital Appreciation" of which homeowners will get to downgrade and earn a tidy sum for retirement, this however is what I would liken to a Ponzi fairy tale, where the later generations or later buyers will eventually find themselves in a position where no new buyers could afford their exorbitant HDB flats without destroying their retirement needs. Some would question if I would promote the other extreme, that to make people pay for their housing through cash and not by CPF, I would say yes because that was how our parents' generations bought their first HDB flats for two decades before 1989.

5) Separation of OA, SA and MA when you actually have so little
The idea of fund segregation works if you have at least half a million sitting in your CPF after paying off the house, but to the average Singaporean who could only have barely up to $250K in CPF after working up to 67 years old, it is unlikely that you will be able to satisfy any single purpose of your needs in housing, retirement or medical. You will find that you are stuck in nowhere - too little in OA to buy a flat, too little in SA to retire and too little in MA to financially survive a major operation. For those with low CPF funds, they are often barely surviving with take-home cash i.e. a cleaner taking home $800 for a $1000 salary, which leaves you really stuck in the daily cost of living too. We should consider a CPF-lite version for the low income earners, where at least 2 out of 4 needs could be sufficiently met while the other 2 aspects will have to rely on social benefits.