No permit needed for Philippines Independence Day in Singapore? 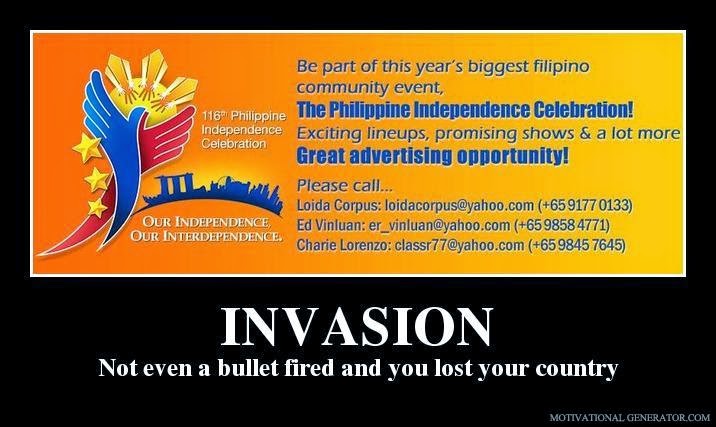 Under the Public Order Act 2009, any public assembly or procession of one or more persons, held in any public place to which members of the public have access as of right or by virtue of express or implied permission and intended to:

will require a Police permit unless otherwise exempted.


Did the Singapore Police issue a permit to congregate to the Philippines Independence Day organizers?

The question is pertinent because it will establish if Foreigners are indeed given special treatment as compared to Singaporeans. For Singaporeans, the above Public Order Act is imposed strictly and actively observed. Founder of unemployment support site, Gilbert Goh, has his share of first hand experience with the PAP government. During one of his protests against public transport fare hike, Gilbert Goh was told by the Singapore Police that if he burns the effigy of Minister Lui Tuck Yew, he will be "arrested on the spot". Contradictingly, in an article by PAP-controlled media Today, it was the Singapore Police force who did not object to the idea of burning effigies in the protest site.

If the Filipinos are given the right to congregate without a permit and none of them are arrested, Singaporeans like Gilbert Goh should enjoy equal liberty to conduct a massive demonstration outside Ngee Ann City calling for Lee Hsien Loong to step down.

Aside from the permit to gather, Section 3 of the National Emblems ruled that the public display of any foreign flag in public is deemed illegal. Did the Filipinos apply another special kind of permit that allow them to fly their flags and sing their national anthem on Singapore soil? As no such permit could be found, is the Singapore Police going to create a special permit for them or simply pretending ignorance?

What about the positions of the PAP leaders? None of them have spoken up regarding the issue of Filipinos disrespecting Singapore. Are they too busy checking the ceilings of coffee shops in Opposition wards?
Posted by Cheated Singaporean at 17:09